“The essential is to excite the spectators. If that means playing Hamlet on a flying trapeze or in an aquarium, you do it. ” Orson Welles 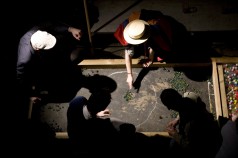 Welcome to Marble Kingdom. A nation founded on the principle of play and investigation. A nation surrounded by mountains of marbles, from Cat’s Eyes to Butterfly Boulders, from Half-Pint to Boulders, this land is open to your imagination. Nothing is contravened. Everything is open. The only one rule is to enjoy and laugh. A rule imposed by the bastion of Marble Kingdom, so be warned, ears are everywhere and punishments are cruel. 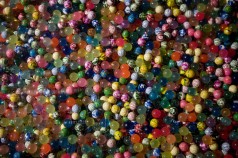 Alley or real – made of marble or alabaster (alley is short for alabaster), streaked with wavy or other patterns with exotic names like corkscrew, spiral, snake, ribbon, onyx, swirl, bumblebee, butterfly, and…

An orange and white toothpaste marble

Oilie or Oily - Opaque with a rainbow, iridescent finish

Pearls – Opaque with single color with “mother of pearl” finish

Lutz - a type of swirl, taken from the skating term

Clambroth – equally spaced opaque lines on a usually opaque base

Aggie - made of agate (aggie is short for agate) or glass resembling agate, with various patterns like in the alley

Bumblebee – mostly all yellow with two black strips on each side.

China – glazed porcelain, with various patterns like in the alley

Plaster - a form of china that is unglazed

Commie or common - made of clay

Bennington - clay fired in a kiln with salt glaze

Crock – made from crockery (earthenware) clay

Crystal or clearie or purie - any clear colored glass – including “opals,” “glimmers,” “bloods,” “rubies,” etc. These can have any number of descriptive names such as “deep blue sea”, “blue moon”, “green ghost”, “brass bottle”.

Galaxy – lots of dots inserted like a sky of stars

Mica – glassy to translucent with streaks or patches of mica, ranging from clear to misty

Steely – made of steel; a true steely was made from a flat piece of steel folded into a sphere and shows a cross where the corners all come together. Without the cross, it’s just a ball bearing.

Sulphide – Usually, a large (1.25 to 3 inch) clear glass sphere with an small statuette or figure inside. Most common are domesticated animals such as dogs, cats, cows, etc.; then wild animals; human figures are scarce; inanimate objects such as a train or pocket watch are very rare and command high prices. The interior figures are made of white clay or kaolin, and appear a silvery color due to light refraction. A sulphide in a colored-glass sphere, or with a painted figure inside, is also very rare and brings a high price. Like other types of antique marbles, sulphides have been reproduced and faked in large quantities. 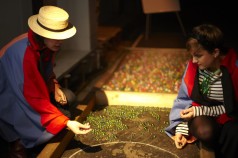 Chik Budo are a band with Saxophones and Synthesizers. They will not however bore you into submission with delicate twittering Jazztronica, they will instead blast you with a Squawking New Wave Electro Disco Party that will redefine your concept of… read more →

‘An Extract from A Declaration of Principals and Intentions’

As somebody who regards anxiety in a red way I aim to use this in a variety of frustrations in the hope that others understand the risky in the end. Thank you.   Links: www.dothoward.com www.liveartcollectiveeast.com www.wordpress.com/otherotherother

MIND THAT NANO PARTICLE! Come and enjoy ice creams raining from clouds!   Developments in nanotechnology and planetary-scale engineering point to new possibilities for us to conform the global environment to our needs. These advances combined with a dream to… read more →